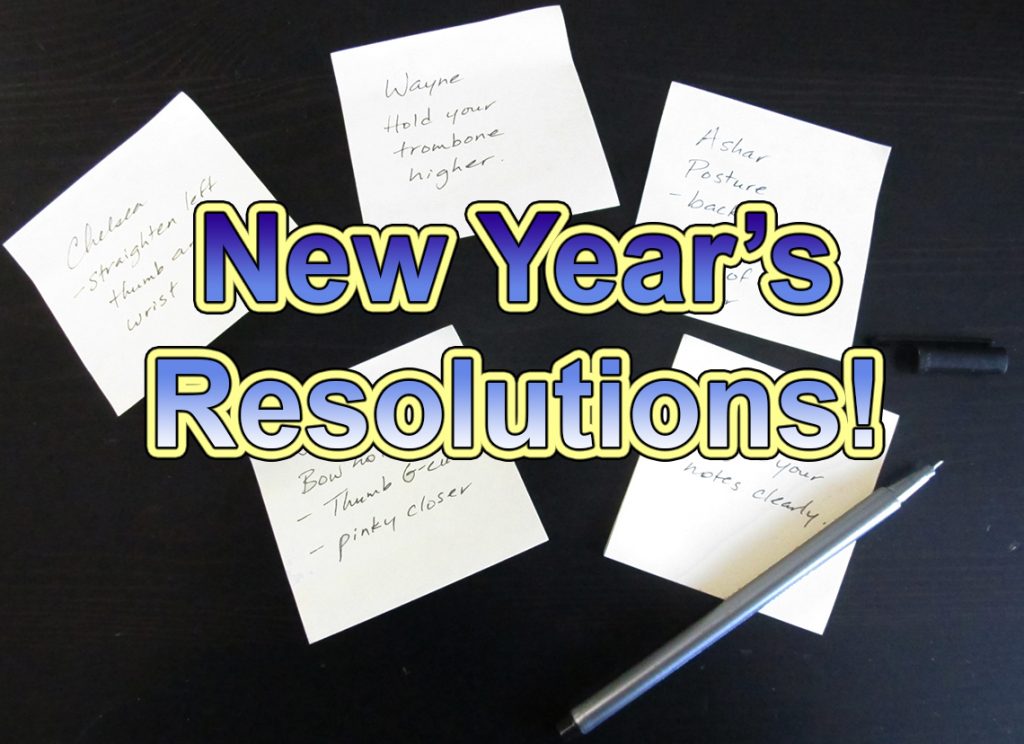 Tired of your reminding your students to fix their posture?  Hold their instruments higher?  Correct their bow holds?  Whatever the problem, now’s the time to take advantage of the fresh start of a new year by having your students focus on replacing some of their bad habits!

On Monday, I announced to all my classes their new assignment for the New Year.  First, I gave them new music to practice, and told them I would be observing them and jotting down on a sticky note one habit I wanted them to change in their playing.  I would then stick the note on the left side of their music folder.

I told them that during the next two weeks, I would be observing them for improvement, and if they successfully replaced their current habit with the correct habit, the sticky note would be moved to the right side of their folder and they would get a new habit to work on.  The plan is to do this for up to three new habits, which is six weeks.

Not only is this a fun way to remind students to fix those habits that you keep harping on them about, they will feel a sense of accomplishment once they have mastered something that they have been struggling with.  They will also learn that changing a habit really doesn’t take all that much work; it just requires the opportunity to devote some focus to it.

1.  Replacing a habit is simple!

First, the idea of changing a habit can seem like a long and arduous task that will take too much work.  But when you stop to think about it, it’s actually quite easy.  All you have to do is put in just enough effort at the very beginning of establishing your habit until it becomes automatic.  After that, you can look forward to never actually have to think about that habit again!

When you look at it that way, changing a habit actually looks pretty easy, doesn’t it?

Another secret is, working on only one habit at a time.  Why?  Because as human beings we really only have enough focus to devote to changing one thing at a time effectively.  The more things we try to change at once, the more our energy is divided, and the more likely we will not accomplish anything.  So resist giving students more than one thing to correct at a time.

Turn this into a formal assignment, or just a fun activity with rewards at the end.  Enjoy the results!

(By the way, this is also a great way to go through all your sticky notes.  I have stacks of them and am always looking for new ways to use them up!).